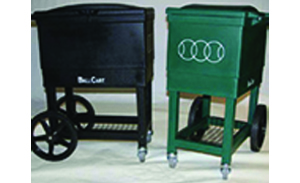 The TennisCart (aka: SportsCart or Teaching Cart) is similar to the BallCart except for a few key features. Like the BallCart, the TennisCart is made of a durable molded plastic and also has a lockable lid. This allows for the tennis balls to be completely enclosed from the elements. This cart also comes with an optional umbrella holder to protect you further from the elements including that hot summer sun. The hopper has the ability to hold over 500 tennis balls. It will never mark up tennis courts because it is equipped with non-marking wheels. There is also an option to have 4 casters. If you are looking to transport a large amount of tennis balls then look no further than the TennisCart. Available in green or black. 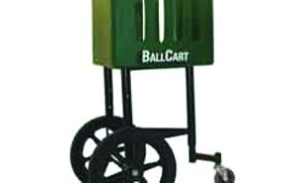 The Tennis BallCart has a molded plastic ball storage area or hopper that sits upon a powder coated steel frame with “no rust” aluminum insert legs. These legs are fully adjustable and are easy to move up and down for the perfect height desired. This cart is supported by two large non-marking back wheels and a heavy duty front caster which allows for easy transportation. The ball hopper has the ability to hold over 250 tennis balls. Available in green or black. 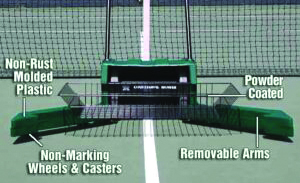 The Pick-Up Ball Mower(aka: CourtServe Mower)is made from a non-rust molded plastic that is incredibly strong and durable. It will not scrape up the court surface either because of its non-marking wheels and casters. Simply roll over the tennis balls for a scrape-free, smooth pick-up of hundreds of tennis balls. And it will alleviate back strain due to the fact you no longer have to bend down to pick up all those tennis balls all over the court. Each Ball Mower comes with a rust resistant large basket that can hold as many as 200 tennis balls. Having troubles with your current mower getting caught on the net or the fence? Not a problem with the CourtServe Mower because the plastic removable arms never grab netting or fence. The Pick-Up CourtServe Mower comes in a choice of “Tennis Court” green or “Sports Tutor” black. 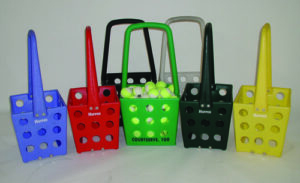 Our Tennis Pick-Up Hoppers are ideal for any tennis enthusiast. Hoppers come in eight colors to choose from — Black, White, Blue, Red, Light Green, Dark Green and Yellow. Each hopper offers a large heavy-duty handle for easy pick-up and carry. Constructed with a light-weight molded plastic, each hopper is both extremely durable as well as light. Our pick-up hoppers can hold as many as 85 tennis balls and because they are made of light-weight molded plastic they will never rust and will last for years and years. 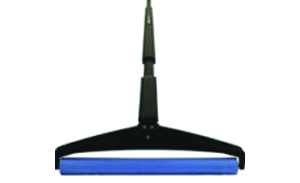 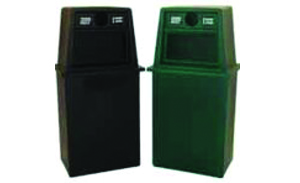 The CourtServe CourtCan is a high-grade trash receptacle and also has a separate area on the top for collecting old tennis balls. It is made of UV protected. molded plastic and comes in a two different colors; dark green or black. Being that it collects both old tennis balls and trash separately, the CourtServe CourtCan is the only trash can that will actually pay for itself by collecting all those extra balls to use in ball machines and practice buckets or hoppers. Available in green or black.

For Clubs and Private Courts

The Shotmaker is our top-of-the-line professional ball machine. Its power and versatility will challenge players at any level, including professionals. In fact, Shotmaker is used by tennis pros at the ATP Training Center in Florida.

Shotmaker provides the features you would expect from a top-of-the-line ball machine including:

The Shotmaker’s ball hopper and body are made of high-impact injection-molded plastic and powder-coated aluminum for strength and rust resistance. The electric motors are all commercial grade and maintenance free. 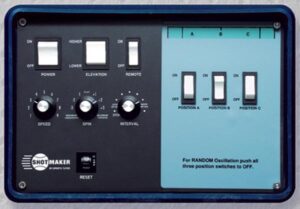 The left side of the control panel controls the type of shot you want. Individual dials set speed, spin and the interval between shots, while simple switches control Power (On/Off), Elevation (Higher/Lower) and Remote (On/Off).

The right side of the control panel can be programmed to deliver balls to any or all of the three positions (A,B,C) shown on the tennis court diagram above the corresponding switches. For instance, to throw to positions “A” and “C” only, push the “A” and “C” switches on, and leave the position “B” switch off. To “fire” balls randomly across the court push all three position switches to “OFF”.

A two-Function wireless remote control lets you start and stop ball delivery, and control the side-to-side position of the ball throws. 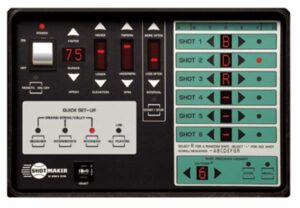 The Deluxe model is our most versatile yet easiest to use Shotmaker.

The Quick Set-up feature of the Deluxe model provides one-touch shot selection based on playing ability. Just push the button corresponding to your skill level (beginner, intermediate, or advanced), and the Deluxe model will automatically deliver a pre-programmed shot to the middle of the court at an appropriate interval. If you want something other than pre-programmed shots, you can use the Quick Set-up buttons as a convenient starting point, and then adjust the shot characteristics and shot positions with the easy-touch controls.

The Deluxe model can be programmed to deliver balls in a pattern of up to six shots (SHOT 1 thru SHOT 6), with each shot directed to any of seven different court positions (A,B,C,D,E,F,G) shown on the tennis court diagram, or to a RANDOM position. If a shot selector switch is set to OFF it will not be included in the shot pattern. Indicator lights show the active shot position.

The Shot Program Memory lets you store shot sequences for your favorite workouts or drills, and then recall them with a touch of a button. The Shot Program remembers every single setting on the control panel including Speed, Elevation, Spin, Interval, and Shot Pattern. You can store up to nine Shot Programs that can be recalled at any time. This feature is especially useful in situations where there is more than one user for the machine, as each user can program in their favorite settings. 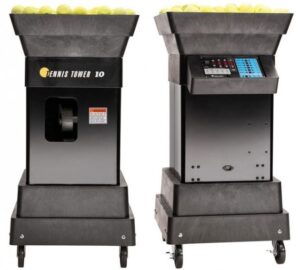 The Tennis Tower IO is a mid-priced professional ball machine with top-of-the-line features. “IO”stands for “Internal Oscillation”, which means that only the ball-throwing mechanism inside the machine moves to change the side-to-side position of the ball throws, instead of pivoting the entire machine. “Internal Oscillation” disguises where the ball will be thrown, and is also much quicker throwing balls from spot to spot.

The Tennis Twist was designed especially for beginner tennis players. Its compact size and easy operation make it an ideal first time ball machine for any starting tennis player. If you can swing a racket, you can play with the Tennis Twist.

EASY TO USE
Tennis Twist is simple to use. Just turn it on and it shoots a ball every five seconds. The arc of the ball can be adjusted anywhere from 12 to 20 feet in length. The unique spiral design holds up to 28 balls.

Tennis Twist is available in AC or battery-powered models. The battery model will operate up to 10 hours on six “D” size batteries (not included). Tennis Twists adjustable range makes it practical for use in driveways, backyards, and even basements. It weighs just 11 lbs. and is easy to transport to the local tennis court or park. The high impact plastic case comes with a convenient built in carrying handle.